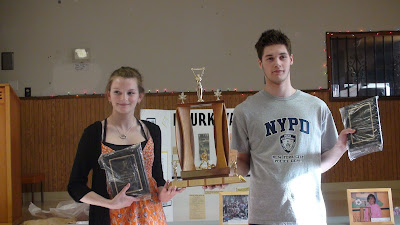 Bourkevale residents Breanne Yozenko and Ryan Templeton have been selected as the 2010 recipients of the historic Bob Pyne trophy, awarded by the Bourkevale Community Centre to recognize excellence and dedication in amateur hockey.
Yozenko, this year's female winner, is an accomplished player who played with Sturgeon Creek Community Centre and also skated with her high school hockey team this past season. Templeton, this year's male recipient, is a former AAA player who has enjoyed years of success in amateur hockey. Templeton played for the St. James Collegiate team this year.
"We think it's very important to recognize the dedication and hard work our Bourkevale youth put into amateur hockey," said BCC hockey convenor Jeff Valgardson. "These kids play with a lot of heart."
The Bob Pyne trophy was first awarded in the early years of the Bourkevale Community Centre. The trophy is named after the late Bob Pyne who was instrumental in building the centre which officially opened in 1949. The whereabouts of the original trophy is unknown. But a new version of the trophy was resurrected in the 1980s and awarded for several years.
After some 25 years of dormancy, the Bob Pyne trophy was awarded again in 2009. Last year's winners were Devan Schram and Alana Moffat.
Newer Post Older Post Home