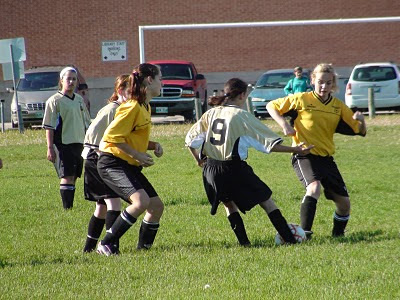 The Bourkevale Blades U13 girls soccer team opened its outdoor season last month and are looking forward to an exciting season of soccer. The Blades, also known as the Bourkevale "Bumble Bees" according to some players on the team, are one of five teams playing out of the club this year. Their home field is the St. James Collegiate soccer pitch, directly north of the Bourkevale grounds.
The Blades play in the north division of the U13 Girls Recreational league, which includes teams from Stonewall and East St.Paul.
Bourkevale won its opening match-up 2-0 against PCW (Olsen). The "Bumble Bees" tied their second game 2-2 against VGCC's Perdonic squad.
Come out and cheer on the team at St. James Collegiate Tuesday June 15 at 6:15 p.m. when the Bees take on Garden City. The Blades also play home games Sunday June 20 at 6 p.m. against Stonewall and Tuesday June 22 at 6:15 p.m. against VGCC.
Newer Post Older Post Home