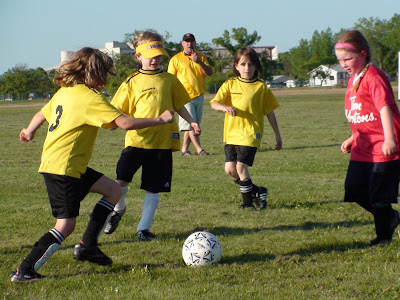 The Bourkevale Bullets are enjoying an outstanding season in 2010 with 13 local talented players. Many of the players — turning either 7 or 8 this year — have been together since the early years when they first kicked the ball around at ages 4 and 5.
Head coach Mark Saunders is joined by assistant coach Cameron Iwanusiw and team manager Mel Saunders, making up the team's dedicated volunteer coaching staff.
Most of the team's games have been on the road in May. But the Bullets play their final games in June Mondays and Wednesdays around 6:15 p.m. at Bourkevale's mini soccer pitches right at the club. Get your lawn chairs out and come and cheer on your local players.
It doesn't get more fun than this!
Newer Post Older Post Home