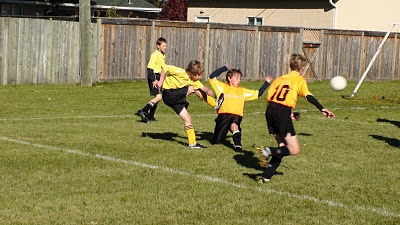 The Bourkevale Bruins U11 boys soccer team not only had a highly successful outdoor season this year, they had an extremely fun and exciting soccer experience. The Bruins cleaned up in the regular season, finishing first in the 10-team St. Charles Soccer Association league. That earned them a spot in the A-side of the playoffs, squaring off against the best teams in the city. And the Bruins did very well, coming in third place out of six teams in their division in post-season play.
"The boys had a great season," said Bruins coach Rob Dorbolo, adding he was very proud of his team's performance this year.
Meanwhile, the Bourkevale Blades U13 girls team came within a whisker of making it to the finals in the B-side of their league. The Blades, who finished sixth place out of 12 teams during the regular season, performed exceptionally well in post-season play with a 3-1-1 record, only two points behind first-place River Heights. For full playoff standings for the U13 gils, click here.
Newer Post Older Post Home