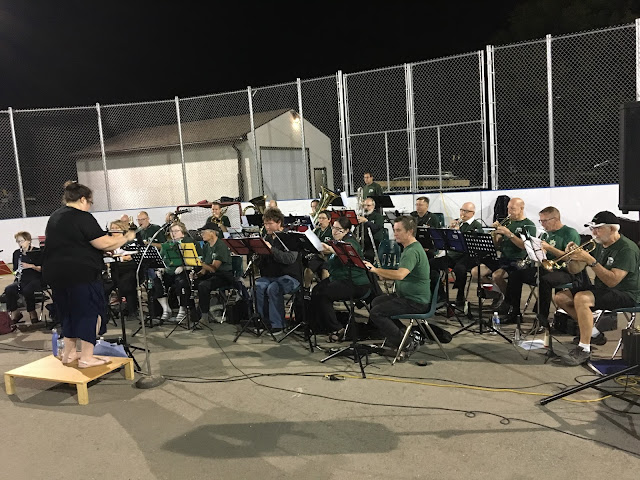 The Millennium Big Band performs at Bourkevale's annual Hoedown Sept. 9. The event was another great success. Thanks to all the volunteers who made this year's Hoedown such a great event.

Bourkevale was one of many official pit stops around the city for Winnipeg's Bike to Work Day Friday June 23. About 25 riders stopped by en route to their destinations. Among them was Winnipeg's Mayor Brian Bowman and local Coun. Scott Gillingham. A big thanks to Mary and family and Kim for organizing the event.

Joan Templeton began volunteering at Bourkevale in the 1960s, when her son was four and when community centres in Winnipeg were the social hubs of most neighbourhoods. Nearly half a century and literally thousands of volunteer hours later, Joan is finally relinquishing her duties.
The mother of two and grandmother of four began her volunteer career at Bourkevale - when the club was barely 20 years old - as a member of the ladies' auxiliary, which in those days were the chief operators of Winnipeg community centres. Joan took on a number of responsibilities at the club throughout the years, including canteen duties, the social committee and hall rental coordinator, a position she held until this month and one which she performed dutifully and with the kind of loyalty that keeps volunteer-based community clubs alive.
Joan is undoubtedly one of the longest serving volunteers of any community centre in the city, having given some 48 continuous years of her time, energy and passion to the club.  She has not only "given back" to her community, she has helped make it what it is today; a close-knit, family-oriented group of area residents with a strong sense of collegiality.
Joan will be missed, but we know she'll still be around to help out with the odd event. Thank you Joan for your years of unwavering service to the community.